A group of trolls has convinced themselves that I’m somebody else.  Cleverness is not their strong point.

I have extensively documented these trolls who have targeted my blog and me in the past.  You can find the stories in the Troll Archives.

I’ve now discovered that these people are convinced I’m somebody else.  There is opinion and there is fact; my identity is provable fact.  They are wrong and are committing defamation and libel, because they also accuse this other person of being a catfish, meaning they also are accusing ME of being a catfish now.

Now, I have always used handles on the Internet, to keep Internet Wackos from tracking me down to my place of residence etc.  But I have never claimed to be somebody I’m not, have never catfished anybody.  And I most certainly am not named “Jackie.”  The last time I even knew a person with that name, was back in college, 25 years ago.  Also, I have always lived in the Great Lakes area, while Jackie has always lived down South.

Check out this recent exchange which I have screenshotted:

(It’s hard to find all the comments just by clicking on the post, but you can see most of the troll comments here.)

The first crack was about a comment I made to my friend Kate, who had just laughed so hard she spewed her drink out of her nose.  I told her my college friends used to chant “spew! spew! spew!” whenever this happened.  New troll account Anastasia replied:

Um–What?  I told my college friends how supposedly we didn’t actually do this thing that college kids don’t do, even though we did.  We had a good laugh over it.

I started this thread; Anastasia’s usual target Sam responded; I guess that was enough to bring in Anastasia: 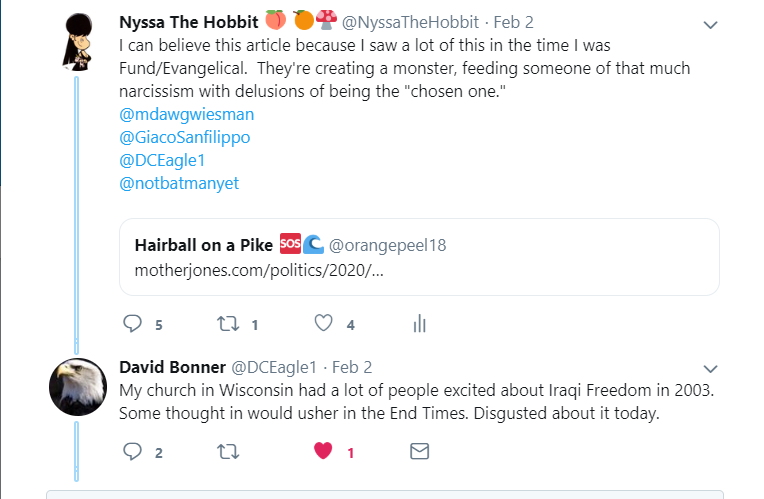 For a couple of weeks, I didn’t know Anastasia had crawled into the thread, since I’d blocked her.  Then I found her scolding my friend Sam, whom this group of trolls has accused for five years of being “Jackie.”  Since Anastasia is now accusing me of that, too, along with other people such as Kate, I said Anastasia sees Jackie in her breakfast cereal.  She responded, “Good one, Jackie!”

Other trolls came in.  One is Anastasia’s alternate account; I don’t know who the other two are.  This is just a couple of the tweets:

One account was new to me; I discovered it today.  The other ones were all blocked already, so I blocked her.  It was NOT Anastasia, who was already blocked (you can click “view anyway” to see an account you’ve blocked).  I posted:

This felt like a good time to finally demonstrate to one of my friends (who was in the thread) that he’s not alone, because he has his own trolls threatening him on Twitter, Facebook and online.  I once told him about the trolls who targeted me, when he mentioned that I’d need to use my real name if I wrote an article for his blog.  But it seems that Anastasia has to make everything about her.  And apparently she’s using a different browser to check the thread, because all these trolls are supposed to be unable to see my replies, since they’re blocked.  So while I was posting to my friend, Anastasia began posting: 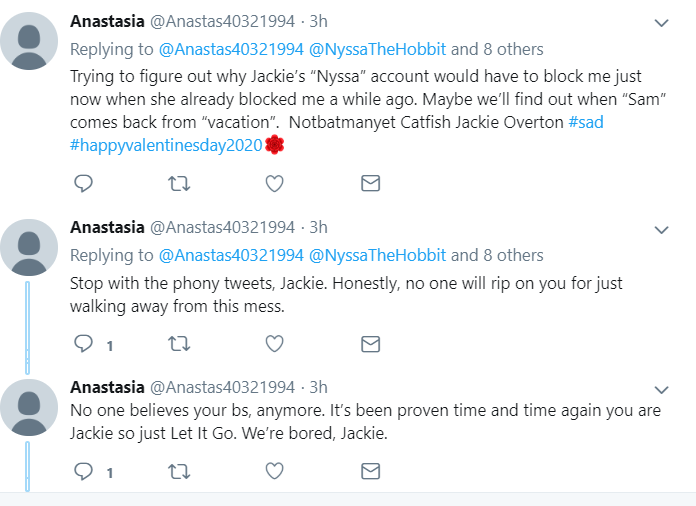 If you’re so bored, why do you keep hanging around harassing innocent people?  They’ve gone after a multitude of accounts the past five years, accusing them of being “Jackie,” even when a simple profile check will tell you it’s not.

What, stop tweeting to my own thread?  You realize you didn’t create this thread and are not the only one on it?  Or do you mean Kate–who, by the way, had only just replied the first time?

I began pulling in friends who know who I am; most through my Facebook account, but you can tell it’s “real” because my family connections and friends from all the way back to Kindergarten are on there.  I’ve had it for ten years; you can find all my contact info, life history, etc. on there.  Which is why I never post my real name out on the Interwebs, and have all sensitive bits of my Facebook profile closed to anyone but friends.

One of the people I pulled in was my college roommate.  I would’ve loved to pull in another friend from my current church, but he has unfortunately taken his Twitter account down.

Now, all these people have lives and apparently didn’t see my pings, but any of them could tell these trolls they’re full of bull ?.  Meanwhile, Anastasia just kept going, digging herself further and further into her pit of stupidity:

So–It’s entertaining for you to falsely accuse someone and then watch them get upset about it and counter with the truth?  You really look like a bunch of psychopaths. 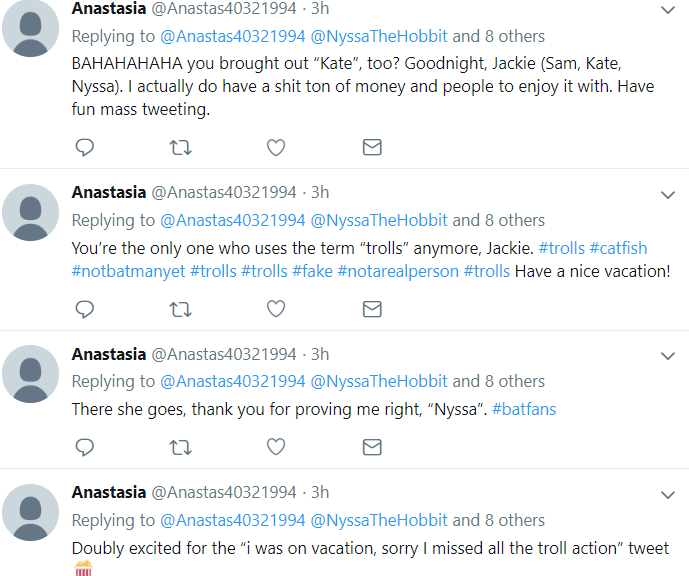 Excuse me, what?  You are wrong.  So how exactly did I prove you right?

And BTW, EVERYBODY IN THE WORLD still calls it “trolls.”  People in Asia probably call it “trolls.”  You–don’t even know what reality is.

I go off for an hour or so to shake off the ? show, while I get some chores done etc., and come back to this:

Stop with the replies to MY OWN THREAD and MY OWN FRIENDS?  YOU’RE the interloper.

This episode, by the way, is an excellent example of why you can’t trust trolls–especially these trolls–of telling you the truth about people.  In the 3 years I’ve been on Twitter, I’ve seen lots of examples of trolls trying to “bring down” some Twitter account by telling the “truth” about it, or questioning its veracity.  Yet these accounts have already been proven to be real, one way or another.

Also, this particular group of trolls, when accusing Jackie of being a catfish and a myriad of Twitter accounts of being Jackie, gives as “evidence” what appears to be tabloid trash, or their own webpages and memes.  Sam understandably went into hiding online, burying identifying information, because these are the sort of people who showed up where they thought Jackie was living.

Meanwhile, my own checking of the criminal records of the Jackie they accuse, pulled up nothing but an unpaid traffic ticket.  I checked it again just now, in fact, and that’s still all there was.

They claim that fellow troll “MM” reported Jackie to the FBI.  But if Sam is really “Jackie,” then why is Sam’s account still posting online freely, and Jackie not in jail for all these supposed crimes reported to the FBI TWO and a HALF YEARS ago?  (With them identifying Jackie and her address, it should’ve been an open and shut case–IF it were true.)  If Sam’s a woman, then who is this man doing Sam’s podcast?  And wouldn’t his girlfriend know he was actually a woman, considering that she’s visited him (I have verified both this and her identity)?

Meanwhile, these trolls are cackling away at being so clever, when they’ve actually been very, very stupid.

Update: Now a different troll is trying to doxx me and tell me they know all about me.  Which shows what psychopaths they all are, playing mind games like this.  It also shows exactly how credible they are.  Keep that in mind when you hear the rumors that they spread, or any other trolls you encounter online.  In the meantime, please go into that thread if you have a Twitter, and report them all.