I remember what an anxious and happy day it was.  I was excited to meet you, though I was also very shy.  I gave you soup because it was a fasting day and that’s what we had.  My shyness lasted for days because you didn’t look like your avatar, and I couldn’t match you with the voice on the phone.  But then we started talking music one day, and it all clicked.

I know you–or at least Tracy–still read here, so you’ll see this.  Can you believe it’s been that long?

At the time I did think you were the coolest person I’d ever known.  Thought of you as my spiritual mentor and brother.  Loved you dearly.  I had no idea all this crap would go down.  I still think fondly on that time period even though I now believe you were manipulating me…. Was any of it for real?

Fortunately, God has given me new friends so I no longer grieve you like I did years ago.  I have been growing especially close to one.  They don’t dictate to me how I should act or what I should think, or tell me my feelings don’t matter or that I’m just being ridiculous or that sexual harassment or abuse never happened.  They don’t call me crazy or intimidate/threaten my husband.  My close friend is also a fellow introvert, is a writer, and is obsessed with German stuff just like I am.

But that doesn’t mean that gaping hole in my heart no longer exists.  It’s just been–covered over, I guess.  I don’t forget people; my friends stay in my heart forever even when I forget their names or haven’t seen them in 30 years.  Even my old friend-with-bennies is still there, despite how he mentally abused me….

You know Merry and Pippin are gone now, and that little boy is now a teenager.  He has two spice finches.  The library is a library again, but also a game room now, with the futon so guests can sleep there instead of on the couch.  And we have a regular couch again.  We also remodeled the bathtub.  Things look very different now but still much the same.

Sounds different since nowadays I listen to Goth/EBM/Dark Electro/Industrial all day on the stereo instead of alternative/hard rock.  🙂  Upgrading technology made the difference there: Before I could only listen to over-the-air stations on the stereo.

I’m learning Greek–I’m Father’s top student–starting the third year now.  He keeps telling people not to talk to me in English anymore.  I run the church website.  I’m a regular member of the local Writer’s Club.  But then, you probably know all that, as a regular follower of my blog.  😉

My son’s brilliant, and currently working on a Lego robot.

As the years pass I keep thinking that no time has passed at all since October 5, 2007.  But now the weight of the years is just beginning to fall, a little bit at a time, even though it feels like I just blinked my eyes and 10 years passed.  It is scary because if 10 years can pass so quickly, so can 20, or 30, or 40.

But for that reason I’ve been trying to spend my time wisely.  Not in grieving over you anymore, but in following my passions–such as music and, especially writing.  The Muse is back and she has taken a seductive hold of me.  The characters of my book first appeared more than 30 years ago, and now they’re back, sucking me into their world; I think this is going to be my masterpiece.

But Orthodoxy?  Not the hold it once had.  Sometimes I wonder if I only went into the church because of you, because I felt lost when you were no longer there to remind me of why I became Orthodox.  But my dear, close friend of 5 years is in the same church, a fellow convert, so I have someone to talk to again about religion.  And the congregation feels like family now, so that keeps me anchored.

Religion itself has been alienating me lately, from a malaise over reading the Bible over and over so many times I no longer see the words, cynicism over who really makes the rules and how they’ve affected many women and LGBT, and Phariseeism taking over conservative churches while they wed themselves to the fascist Republican Party.  Though I refuse to give up on God or Jesus.

So much is the same, but so much is different.  I sometimes wonder if anything about you is different as well….And how much of the person I knew was real.

Happy tenth anniversary.  That’s tin/aluminum, so here’s a can of beer: 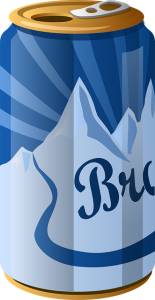