So I’m checking out the blog of a fundamentalist who claims that Trump is indeed the Antichrist at the End of the World–not sure whether to believe, but curious how he counters objections and explains his points.  Then I come across this:

But nevertheless, Orthodox Jews do believe their messiah will be Jewish and of the house of David – which is true of the True Messiah, Jesus. But they do not recognize Jesus, and so they still search for their Jewish messiah, a false christ, the Antichrist. Please watch my video.. https://youtu.be/F-UxKCzsURI – This video observes that some Orthodox Jews are searching Donald Trump’s ancestry to find a link to King David. –Brother James, Misconception: Antichrist Will be Jewish and Not a Gentile

The video led me to this article in the Christian Post: Some Rabbis in Israel Believe Trump Could Be Messiah or His Forerunner, End Times Author Says  Lots of crazyness is there; especially note this:

“We would say the second coming is about to happen, but their messiah is going to be a false messiah. He’s going to be the anti-Christ, right? I also don’t believe Donald Trump is the antichrist. So I think the smart ones in Israel are looking at him right now, saying, he is God’s, what we would call, John the Baptist. He is God’s messenger. When he takes over in January there is a 5777 countdown to the appearance of the messiah,” Horn added.

The Jerusalem Post reported last month that Shas Chairman and Minister Aryeh Deri said Trump’s election could herald the coming of the messiah due to the blow he expects the next president will strike against the “non-Orthodox Jewish hold on the U.S. government.” 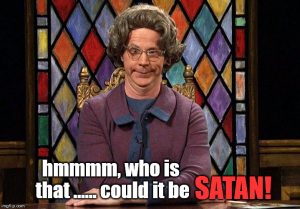 I checked the Jerusalem Post link and did a little googling, and there is indeed such a person as Deri making such claims about Trump.  Meanwhile, Netanyahu has been doing everything he can to benefit from friendship with Trump, which has been fulfilling his wishlist.  Netanyahu has been playing into Trump’s narcissism, even naming a Golan Heights settlement after him.  ABC News reports an Israeli group is selling a special-edition Trump coin.

From Henry Siegman’s What my escape from Hitler’s Germany taught me about Trump’s America:

Since its founding in 1948, Israel has presented itself to the world as an avatar of democracy and guardian of the moral truths the world needs to learn about the Holocaust. Yet its governmental leaders and a majority of its Jewish citizens—led by its prime Minister, Benjamin Netanyahu—have fully embraced Trump (as well, in some instances, as the authoritarian leaders embraced by Trump).

Giant posters and photographs of Trump were recently plastered on the streets and public places of Jerusalem and Tel Aviv. Declaring “Trump is a friend of Zion” and “Trump Make Israel Great,” they expressed adoration of the man who doubled down on his insistence on the moral equivalence of neo-Nazis in Charlottesville and the Americans who took to the streets to express their abhorrence of these racists and anti-Semites.

So I don’t know how pervasive a belief in Trump as the messiah/forerunner actually is in Israel.  But there are certainly groups pushing the idea.  And to see a malignant narcissist such as Trump–one of the worst people this world has ever produced–viewed as a messiah is frightening.  He has a lot in common with, say, Hitler or Nebuchadnezzar.  Many of us see him as far more likely to be the Antichrist at the End of the World.  Or at least one of many antichrists which have popped up throughout history.

Meanwhile, I keep finding various accounts that some Evangelicals don’t bother fighting climate change because they see it as the End of the World rapidly approaching–meaning Christians finally triumph over their enemies.

Whether you believe or not that the Bible truly prophesies the End of the World, complete with plagues and the Beast (Antichrist) and one-world government etc., many people do believe and behave accordingly.  And we have several facts in front of us.

One is that climate change is real and is already leading to catastrophe around the world: erosion, fires, mass extinctions, floods, extreme heat, extreme storms, etc.  People are already losing their homes and being forced to move because of it; animals and other creatures are also on the move.  I’ve seen reports that farmers know very well that climate change is real, because they’re being forced to change their practices.  With or without prophecy, climate change could lead to the End of the World if we do nothing about it.

Another fact is that some groups of people are venerating Trump for various reasons, making him into a god.

No matter what you believe about biblical prophecy, these are very dangerous factors that could turn the End of the World into a self-fulfilling prophecy.  I don’t know about you, but I’d rather fight back, not sit back and allow this to happen because of our own stupidity.

Many years ago now, I wrote the following on one of my theology pages:

Benny Hinn…once came on The 700 Club and said he’d been taken into a trance by God, who took his spirit over various parts of the earth and showed him things that would happen in the 1990s.

In naïve gullibility, I wrote these things down exactly.  I’m not sure where that paper is now, but I remember that few, if any, of those things came true.

So Benny Hinn is also a false prophet who, like Pat Robertson, has lots of followers and tons of money coming in.  And if they’re false prophets, then their faith healing, “words of knowledge”/prophecies, and religious teachings are also suspect.

This website lists many prophecies for the 90s, several of which sound like the ones on my missing paper.  (Also note that God destroying the homosexual community with fire in the mid-90s is greeted with a round of applause.)  He says that Fidel Castro will die in the 90s.  Um, no.: Benny Hinn Prophesies for the Mid-90s

(Well, Castro died in HIS 90s.  By the way, the above link is full of Hinn’s false prophecies for the 90s.  Read and be entertained by all that was supposed to have happened 20 years ago.)