My city’s public high school made it onto the local news last week.  I hoped it would go viral (and did my best to help it along on social media).  My hopes were finally fulfilled when Stephen Colbert did this segment last night:

Don’t worry: Kai the snake is (according to social media and the principal) very friendly and perfectly harmless.  He’s also been found and returned to his home, where he’s going to stay.

(By the way, that is NOT how to pronounce Fond du Lac.)

This is how the school year began for Fond du Lac high school students: with the principal sending out hilarious e-mails/phone messages about a missing snake.  He didn’t mean them to be funny, but we couldn’t help giggling and sharing them on social media.

Imagine having your first taste of freedom in your life, just to be put back in that small cage for the rest of it #freekai 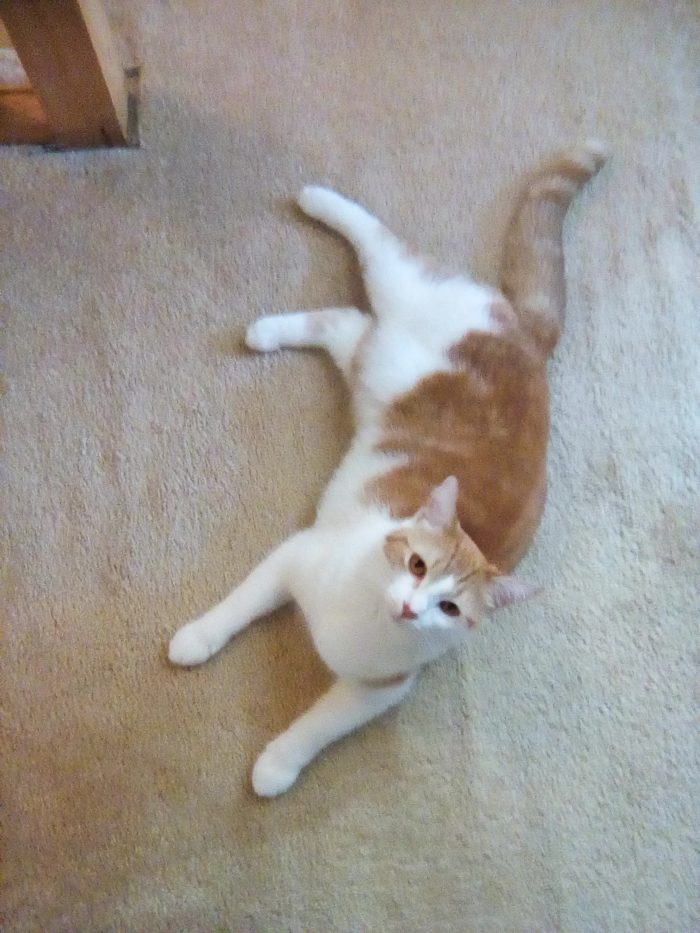 I still remember 2001 as if it were yesterday.  I could swear Richard the Stalking Narcissist came to stay at our house last week (it was TEN YEARS AGO!!!  :O  )  I still feel like a young chick (except for the muscles which groan every time I bend over).  And if not for my hair betraying my age with increasing gray (I don’t want to bother with coloring it right now), I’d probably look 30somethingish.  But my eyes insist that I’m past 40.

I’m already so terribly nearsighted that I even need glasses to read.  Now, for the past few years, my eyes have been struggling with the switch from far to near.  It’s become harder and harder to read the liturgy book or–and this can potentially get really embarrassing–the Epistle when it’s my turn to read.  I can focus after a few minutes, but don’t usually have that much time in church.

In Greek School, going from looking at the teacher or whiteboard to my notebook has been just awful.  I have to tilt paper to read it.  And trying to do finances while the TV is on–I can see the checkbook, but I look up at Colbert, then down at my checkbook, and it’s all blurry again.

I’ve been increasing the font on my computer, and when I finally got a Kindle this year (thanks to b-day money and Amazon’s layaway plan), I set it to a big font.  Which meant that Windows 10 really frickin’ annoyed me by changing the settings so you can’t just adjust the size of your icons etc. anymore, and the default setting is Minuscule.  (I fixed that by downloading a program called System Font Size Changer, but I shouldn’t’ve had to do that!)

3 years ago, the eye doctor said I wasn’t ready for bifocals yet.  After 2 years of putting it off, we finally went back to the eye doctor last month, and he proclaimed that yes, I’m finally ready for bifocals.  Hubby already tried them and hated them, said they were like being in a fishbowl, and switched back to normals.  And my eyes are so bad that the slightest change can be very disorienting, such as when my glasses get knocked into a tilt.  So I was wary.  But the doctor talked me into trying it.

First day trying the bifocals was a nightmare!  I couldn’t see anything anymore, except up on top or down below.  I could NOT see the computer, and I spend a lot of time there with maintaining my blog, writing my novel, networking with other bloggers, that kind of thing.  Since my computer is a laptop, I only had a limited range in which to put the monitor.  So–even though I sit at a desk–I finally held it on my lap at an awkward angle, and hurt my neck trying to look at it through the lower half of my glasses.

Everything directly in front of me/my vision was a blur, making it almost impossible to do much of anything.  I couldn’t see to wipe something off the floor; stairs were dangerous; my head was killing me; and no, it didn’t get better after a day.  Some things came more into focus, but there was still that big blur in the middle of my vision.

Yes, they told me about progressives.  But they said the sides would blur, affecting my peripheral vision.  Now, with my bad eyes, everything outside the edges of my glasses is a huge blur, one reason why I prefer bigger lenses.  And I ride a bike a lot, since driving is dangerous with my NVLD.  So I have to look over my shoulder before changing lanes.  With my bad eyes, this is already difficult with normal glasses, because physics force me to look for traffic outside the edges.  I already crane my neck trying to see.  So blurring the sides of progressives–My gosh, I can foretell getting creamed by a car I could not see.  I’d really rather not get creamed, which is why I ride a bike instead of a car in the first place.  And Hubby said progressives were like a fishbowl.

If this is my fate–wearing glasses for the rest of my life which take a minor inconvenience (trouble focusing up close) and compensate by screwing up all the rest of my vision–then I say, screw that fate!

SO–back I go to Shopko next day.  Fortunately, Shopko does not force you to stick with bifocals, like some doctors apparently do.  For a short time, you can get a refund and replace the bifocals with regular single vision.  So I did that, and got myself a pair of prescription reading glasses, since generic reading glasses are just a big blur.

Maybe if, one of these days, I take on some kind of job which requires quick changes from far to near, I can get a pair of work bifocals.  But for now, a pair of reading glasses and a pair for everything else is doing just fine.  And aaaaaahhhhhh, what a relief it is to put on those reading glasses and see in focus again!  The words are big!  I can even read Doonesbury again!  (I’d been reading it with a magnifying glass.)  I can balance my checkbook while watching TV.  I can see the paper at Greek School without tilting it.

I hear lots of people love bifocals, or love progressives.  Apparently they adjust quickly.  Well, I’m not one of them.  And no, I didn’t want to spend a few days or a week or a month adjusting.  But now, I’m happy again.  🙂

About 8 months after our last kitty died, we finally adopted a new one.  I still miss Merry and Pippin, but this new kitty is a sweetie.  I don’t have a picture of her striking eyes–kind of an amber, maybe–but I do have this: 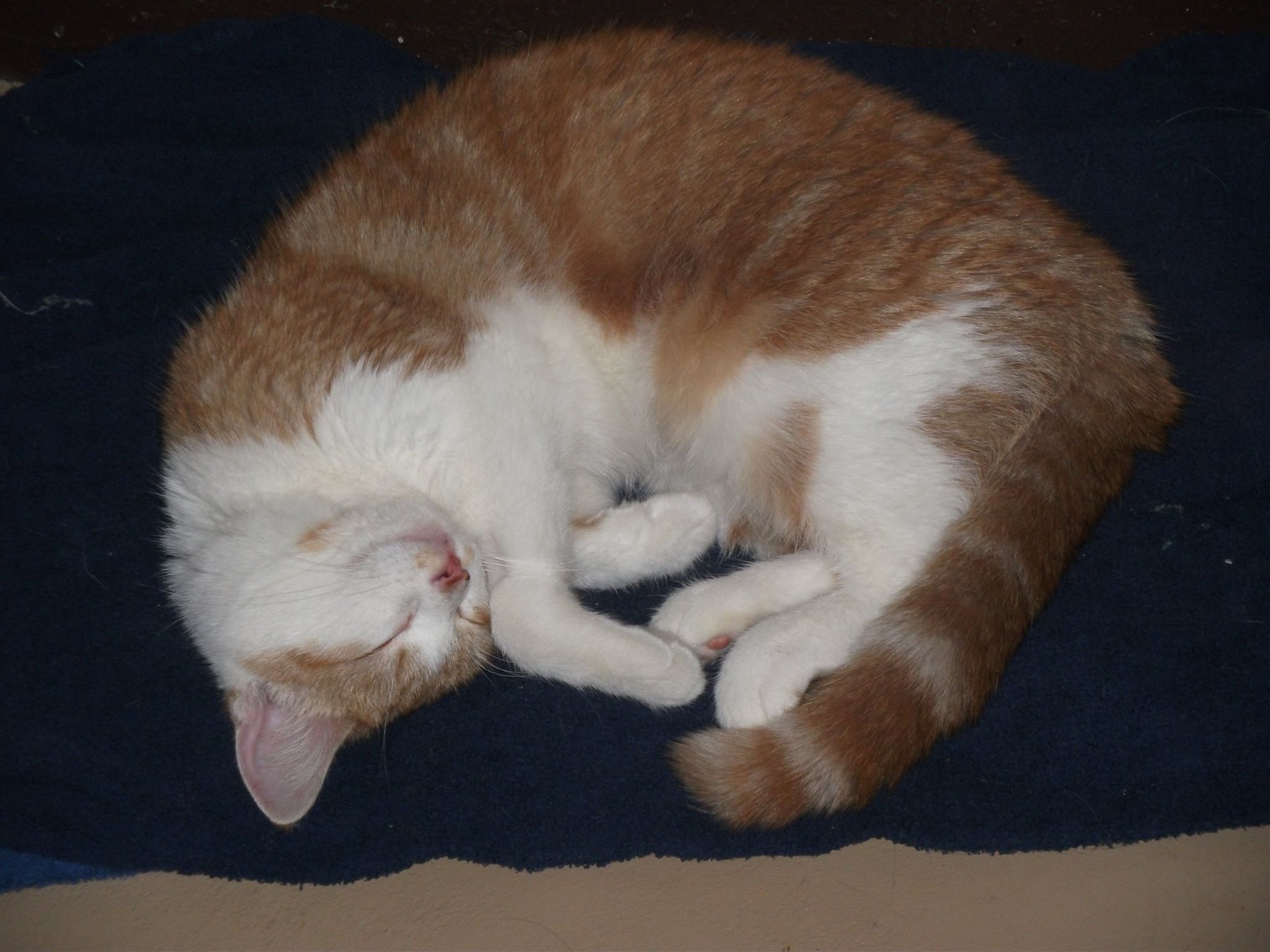 The Humane Society said she’s a year and a half, but the vet records said she’s only a year old.  She’s so tiny that I think a year is more likely.  And she settled right into the house and the family.  Loves affection, loves playing with our son.

We had to cut down a cedar bush-tree in our yard.  It was tall and big and a favorite of all sorts of birds.  A flock of finches has been gathering there for weeks, chattering away and pooping all over.  I put out leftover bread, they swoop in and pounce on it.

But the trunk was rotting away, putting the house, garage, etc. at risk.  And the condo association wants to replace the fence; the tree was in the way.  Certainly good reasons to get rid of it.

But now they just finished cutting it down, I looked out there, and–

I feel so exposed.  😛  I’m used to the big bush-tree hiding us from the neighbors.

Ah, bush-tree, I will miss you.

And now I expect the flock of finches to give us the stink eye.