A mob, Young observes with considerable insight, is a group of fools and cowards. … Mobs rape, they lynch, they immolate, they beat, they terrorize, they loot, and they laugh. … And they are on the Internet.

…Mobs are senseless. They are the very definition of “insanity.” They exist in a world where all reality is—at least for a time—abandoned. They therefore tend to attract the senseless and the emotionally damaged.

They are bent on “justice” and will stop at literally nothing to get it. Every mob, however, defines “justice” for themselves. Hence, lynchings. Justice for mobs usually consists of vengeance or bile spewed on people they hate—frequently for irrational reasons.

If the justice system under which a group lives does not deliver the verdict, the penalty, or the speediness the group requires, a group of people who perceive that they have been wronged or disenfranchised can transform into a mob in an instant. It doesn’t matter to a mob what is truly right, what is legal, what is actually true, what is important or what is sacred.

…Internet mob trolls guard their identity with their lives. Why? Because their lives would change forever if their secret hatreds were made public.

…Another Internet mob targets Amanda Knox for the same reason as did Leyland with Kate McCann—they believe her guilty, regardless of the evidence, and believe they, as Brenda Leyland said, are “entitled” to exact revenge.

…Amanda Knox haters frequently defend themselves by saying that they are fighting for the victim, Meredith Kercher, who was 19 when she was raped and her throat cut by a known burglar.

…People who send or re-transmit 25 – 100 angry, abusive social messages a day, (especially if to the same group of people) regardless of how right they believe their cause, must come to grips with the fact that they need help.

…Finally, if you are attacked by anonymous trolls, know this: They are afraid of you. If they weren’t, they would not hide their identity. Take comfort in the knowledge that they fear you, and they live in the shadows because they are terrified that one horrible day, they may be exposed and have to take responsibility for their words.

These are just snippets of an excellent article on Internet mobbing, by Steve Moore.

Screw fear.  I actually have a life. 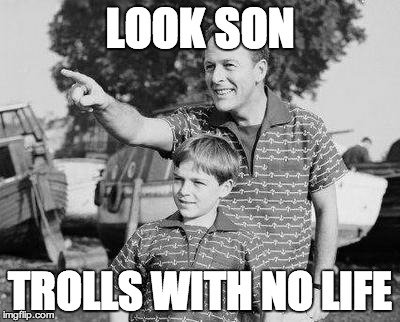 Anyone who spends all his/her time scanning through somebody’s stories of abuse, looking for something to laugh at, deserves to be mocked.  And yeah, I see you guys doing just that.

ANY FURTHER STALKING WILL BRING FURTHER MOCKING.  You have been warned.

These stalker trolls are combing through my posts about sexual harassment and guys who sexually abused me.  I discovered this in my stat records.

They’re looking at my posts about sexual harassment, sexual abuse from exes, and manipulation by my ex-friend Richard (who has absolutely no relation to their alleged catfish, though one troll sent me a jeering message suggesting that it was the same person).

I’ve already gotten a disparaging comment from one of them, and another followed me on Twitter for the obvious purpose of harassing me.  This tells me they are NOT looking at the stories with sympathy or empathy like most people would.

They’re getting their jollies from my stories of abuse.

THIS IS FRICKIN’ DISGUSTING.

This is a vigilante group which claims to be getting justice for the victims of an alleged catfish.  Except I’m neither that catfish, nor a victim of him/her.  As far as the catfish is concerned, I’m nobody.  They have attached themselves to me anyway.

They have also attached themselves to lots of other people in the past several months.  You can find them in the tweets and replies on this guy’s Twitter.  There are THOUSANDS of harassing messages not just to him, but to others, anyone who is friends with him or even just talks to him.

Let’s shine the light of day on these cockroaches.

It’s not just me: This group has been harassing various people for MONTHS.  And now they’ve been screwing with me for no reason at all.

This is a site about abuse.  It contains details of abuse and manipulation, in order to help others recognize abuse and manipulation in their own lives.  I consider the details of my story to be necessary to the public record, which is why I keep them up despite their nature.  I also include details of things I know were my own missteps, because I believe my readers need to be able to trust I’m telling the truth.  I’m shining a light on abuse instead of keeping it locked up tight.

But it works best if everything is read together, in context, not bits and pieces picked out and turned into something to criticize or jeer at.  These trolls have got me frightened of what they’re up to next, wondering why they’re so eager to dig up stuff about me (my abuse stories etc.), and what they’re doing with it.

Maybe–based on their searches and a comment one made on my blog–they want to say, “Hey, look what else the catfish did.”  Or, “Look at this gullible person who became another catfish victim.”  Except…That’s not what happened.  I’ve never been a victim of a catfish, and certainly not their favorite alleged catfish.  I had no interest in getting lured in.  I just wanted to give the guy a chance to tell his side of the story.

This is the kind of thing that shuts up abuse victims.  And yet the trolls claim to somehow be defending the alleged victims of the alleged catfish.  I think some also claim to be victims, though I’m not sure.

Who am I to these trolls?  Why are they doing this to me?

It is, by the way, the biggest reason why I tend to believe the alleged catfish’s story that he is really a man and not a catfish.  True victims don’t behave like this cyber lynch mob.  Many of you are victims of abusers and sociopaths and know how such people can get when they band together.  Rather, this group behaves exactly like the group the alleged catfish’s alleged victim originally claimed was going after her and harassing her.  I think they are the same people.

I wanted to spend this weekend watching Wagner operas, reading, and working on my novel, since I came up with some more ideas.  I want to play with my new Twitter.  This has derailed my creativity because I can’t concentrate when I’m spending every hour scanning for trolls to block.  And I have responsibilities.

I deleted one of the trolls from my blog’s e-mail subscriptions, after discovering I can do that.  I had to turn off the setting that automatically publishes my posts to Twitter, because it just brings them back in.  Hopefully I can soon turn it back on.  For now, the trolls are mostly blocked, and doing most of their peeking with the Wayback Machine and Google caches.  But I’ve seen some of the things they’re looking at in the Wayback Machine [I believe these were sensitive parts of my stories of narcissistic abuse], and wonder why they’re so interested in those particular pages.

Some stuff I found:

Kashmir Hill’s How To Keep Internet Trolls And Harassers From Winning:

The common refrain is that this is the price we pay for being online, that the cost of free speech is ugly speech. Citron says that argument ignores the speech rights of those harassed. “I think we forget the expressive rights of the person who is being victimized, the speech rights of the person being silenced,” she says. “After the harassment, I stopped blogging about harassment for a while. I felt silenced and I backed off.”

Joel Stein’s How Trolls Are Ruining the Internet:

The people who relish this online freedom are called trolls, a term that originally came from a fishing method online thieves use to find victims. It quickly morphed to refer to the monsters who hide in darkness and threaten people. Internet trolls have a manifesto of sorts, which states they are doing it for the “lulz,” or laughs. What trolls do for the lulz ranges from clever pranks to harassment to violent threats. There’s also doxxing–publishing personal data, such as Social Security numbers and bank accounts–and swatting, calling in an emergency to a victim’s house so the SWAT team busts in. When victims do not experience lulz, trolls tell them they have no sense of humor. Trolls are turning social media and comment boards into a giant locker room in a teen movie, with towel-snapping racial epithets and misogyny.

…A 2014 study published in the psychology journal Personality and Individual Differences found that the approximately 5% of Internet users who self-identified as trolls scored extremely high in the dark tetrad of personality traits: narcissism, psychopathy, Machiavellianism and, especially, sadism.

Though everyone knows not to feed the trolls, that can be challenging to the type of people used to expressing their opinions. Writer Lindy West has written about her abortion, hatred of rape jokes and her body image–all of which generated a flood of angry messages. When her father Paul died, a troll quickly started a fake Twitter account called PawWestDonezo, (“donezo” is slang for “done”) with a photo of her dad and the bio “embarrassed father of an idiot.” West reacted by writing about it. Then she heard from her troll, who apologized, explaining that he wasn’t happy with his life and was angry at her for being so pleased with hers.

West says that even though she’s been toughened by all the abuse, she is thinking of writing for TV, where she’s more insulated from online feedback. “I feel genuine fear a lot. Someone threw a rock through my car window the other day, and my immediate thought was it’s someone from the Internet,” she says. “Finally we have a platform that’s democratizing and we can make ourselves heard, and then you’re harassed for advocating for yourself, and that shuts you down again.”

My blockers must be working quite well, because actual hits on my site are going down, including proxies, but now they’ve turned to the Wayback Machine to read my blog.

I HAVE NO CONNECTION TO YOUR STUPID CATFISH THING.  I’M JUST ANOTHER VIEWER OF THE SHOW (formerly).

I DO NOT KNOW YOUR TARGET OUTSIDE OF HIS BLOG/TWITTER.  I HAVE NO CONNECTION TO HIM.

YOU WILL FIND ABSOLUTELY NOTHING IN MY BLOG REGARDING YOUR TARGET.

LEAVE ME THE F**K ALONE.

And if you guys try sending me messages (as I’ve seen you contemplate), I will call the cops.  You have been warned, so any further contact now counts as harassment.  The police have the authority to track you down by your IP address.