If you want to get into the mind of a sociopath, I suggest reading Clarissa by Samuel Richardson.  Or the quick version, watching the movie (with dreamy Sean Bean).  🙂  (Somebody posted the whole movie.  Better watch it quick before Youtube yanks it for violation of copyright.  Though the DVD is available for purchase.)

But the book–all 1500 pages of it–goes far more into the psychological drama.  It was written in the 1740s, but is surprisingly modern, with a thorough understanding of the sociopathic mindset (and a feminist character, Clarissa’s friend Anna, who refuses to “obey” any man).

You get into the heads of everyone, including the sociopath (Lovelace) and his prey (Clarissa).  He alienates her entire family and engineers an impossible situation, so that she finally feels she must throw herself on his protection.

He then proceeds to gaslight her, and use various unsavory characters to hold her captive in a brothel.

He makes her think the brothel is a respectable house, while the inhabitants, who are carrying on the charade and are his abusers-by-proxy, think Clarissa is his frigid wife.  They help him arrange a rape.

She tries again and again to escape, but he keeps following and recapturing her, telling everyone she is his wife, so they will put her back with him.

I first read this book in 1992, and it’s been a favorite ever since.

In my diary and letters from 1992, I gushed over the book, which I found in my college library.  I read some of it while sick with the flu, since I had nothing else to do.  Over Christmas Break, I had no homework and nothing else pressing (except lunch dishes).

This was a wonderful, wonderful book; since my massive version (1200 pages) was abridged, I didn’t yet know that there were even more wonderful parts to it which would explain parts of the plot even more.

I read 100 pages a day–which for me is a tremendous amount, since normally I probably would have gotten through 50 at the most, even reading all day long–and finished on New Year’s Eve.

I loved the Gothic feel of many scenes, such as Lovelace showing up in Clarissa’s hotel as a gouty old man.  I’m not sure if it’s called pre-Gothic or Gothic; it’s been described both ways.  On Masterpiece Theatre, which showed the movie version in the spring of 1992, it was called a Gothic.

It came out before the supernatural tales of the 18th and 19th centuries, but had the traditional elements of an old Gothic: A young, virtuous virgin is abused and locked up by a dirty, usually old, man.

The book was far more intense and intricate than the movie could possibly have depicted, with a remarkable understanding of psychology and the thoughts/motives of each character.

I laughed when Clarissa’s coffin arrived and she had it dragged up the stairs to her room.  She shocked everyone in the hotel, who said, how could she bring her coffin into her room?

She said, how could they be so surprised, since it was just a box to hold her earthly body?  She expected to die and go to Heaven, where everything would be beautiful and peaceful.

Two songs became associated in my mind with Clarissa.  The first was “Unchain” by Whiteheart, on a CD I got for Christmas.

I listened to it over and over during Christmas Break, and the beautiful melody seemed to fit somehow as I read.  Maybe it was the plea for God to “release my soul” and to “unchain.”  After all, Clarissa kept pleading for Lovelace to release her, and no longer keep her a prisoner in the brothel where he had taken her.

The second song was “Ordinary World” by Duran Duran, a song which came out over Christmas Break and was played over and over as I listened to the radio while reading.  I also taped it.

The melancholy music and lyrics fit Clarissa well.  The song may have been about a breakup, but Clarissa’s sadness was due to the rape, betrayal and abuse from someone who said he loved her.  When she died, all the pathos made my eyes mist and my nose tickle.

I drew pictures of the characters, to help me visualize them and their period clothing, since characters are often a blur of emotion and action as I read.  They rarely take on a concrete appearance unless I can look at a picture.  This may be because of NVLD.

I based the first picture of Clarissa on a plate in the “Fashion and Clothing” article from our 1960s Collier’s encyclopedias.  This was my masterpiece.

I somehow got her hair color mixed up: I thought she was a brunette and her friend Anna a blonde, though it was the other way around.

But Clarissa’s features–based on beautiful British actresses I’d seen over the years–were lovely enough to fit her description.  I tried to draw Lovelace, but I preferred the one in the movie, Sean Bean.  I’ve never been good at drawing men.

I admired Clarissa, the paragon of virtue, and the ending brought me close to tears.  I admired her as my ideal.

Maybe I connected with her on a subconscious level, since I knew what it was like to be lied to, lied about, and emotionally abused by men, though I did not yet know just how bad it could get (Phil, a year and a half later).

I had no clue why this happened.  I suppose the natural gullibility caused by NVLD, and the ostracism I’d often experienced throughout my schooling for no reason I could see, made me an easy target.

Boyfriends were never easy to find, especially when my faith said they had to be Christians–and even the Christians could be jerks.  I wanted to stop the abuse, but had no idea how.

Here are two of my best “Clarissa” pictures.  The bottom one was drawn in 1997.  When I showed the first one to my friend in South Bend, she grabbed it with an “Ooh!”: 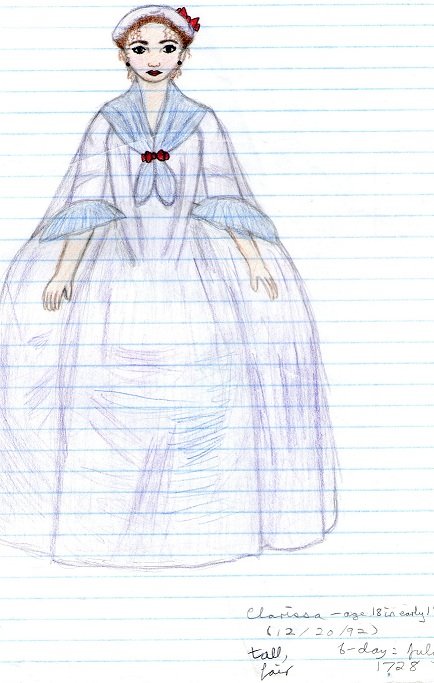 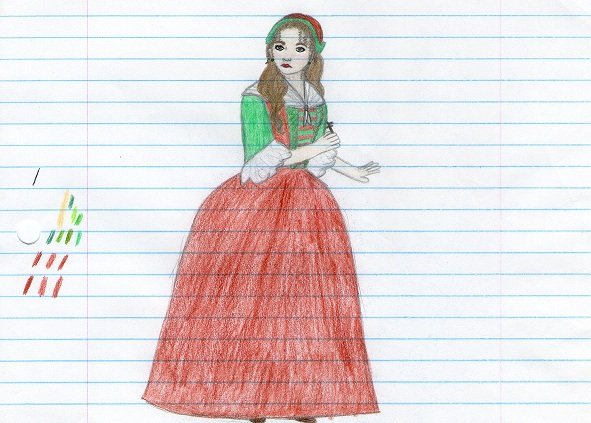