Apparently she felt threatened by our friendship….But just like with Phil, I could recognize when I was getting shafted and mistreated, and spoke up, complained.

She has no more power over me, no control over my healing.  I do not depend on her repentance and apologies to heal; I do not expect them.  Even if I got them, I would not trust their veracity.

She cannot and does not define me.  She has no business telling me my “faults” until she stops blaming others for her own temper tantrums.  Everything she accused me of, was false.  Every criticism she made of me, was false.

I am not that person she tried to convince Richard I was.  No, I was simply a close friend of Richard’s, who believed everything he told me, and was easily led when he lured me into things he should not have, who fell for the lines that we were doing nothing wrong and it was perfectly fine for friends to behave this way.  My “fault” was gullibility.

Her accusations were false.  I did indeed try to befriend her, did indeed welcome her into my home, even with my many misgivings about letting so many people stay there.

For one thing, letting her stay there rather than insisting Richard stop taking advantage of my generosity like this, was a huge blinking sign of befriending.

I chatted with her, liked her, told her secrets, watched TV with her, changed her baby’s diaper unasked, gave or lent her things from my own household simply because she needed them.

No, it was her own suspicious, nasty behavior and abuse that caused trouble, that drove a wedge between us.  She does not get to tell me that it was all somehow my fault, because it was not.  I went through years of wondering whose fault it was really was, going back and forth in my mind, but no, it was not my fault.  I’m flinging off the scapegoat role.

She tried to break my will, but it did not work.  She’s welcome to come here to this blog and learn about her abusive behaviors, so she can abandon them.  She’s also welcome to close her eyes to the truth and ignore my blog–and me–completely, and keep pushing people away.

As long as she keeps coming here, I will keep holding her accountable for the damage she has done.  She alone needs to account before God for the sins she committed against me, for the many acts of verbal and psychological abuse.  It is all on her own head.  I refuse to accept any of it on my own.

I am free.  I am done.  She has no control or power over me.

I felt like poison was being spewed at me but at the same time, I was surprised how calm and rational I was able to remain. I refused to accept the abuse and told them as much.

I was able to stand up for myself in a way that I never could have before I began to heal. I could see that what they were doing to me wasn’t my problem.

I didn’t ask for it or deserve it. I was just the current target but, they soon discovered, no longer an easy one.

As difficult as it is to realize that some people can no longer be in my life, if they can’t give me the basic respect that I deserve as a human being—they don’t belong there. –Penny Smith, Standing Up For Myself: Reclaiming My Self-Worth

Through the guise of forgiveness, I stuffed my feelings and stuck a nice big smile on my face. I was supposed to put the past behind me when I forgave, so I denied my feelings.

Forgiveness was supposed to be the path to healing, so I acted healed. I buried my anger somewhere deep, somewhere I hoped I would never find it.

The anger didn’t disappear. It was buried, but it was buried alive. It scratched and clawed and cried out. Its voice demanded attention, so I gave it expression through abusive acts toward myself.

I continued my own abuse through all kinds of destructive behavior including dangerous sexual activity, self-harm and abusive relationships.

Eventually, I wasn’t only hurting myself, but others. I thought the anger would shield me from the type of things I suffered as a kid. It was the illusion of being in control and more powerful. When I vented my anger, I felt bigger than I was.

I secretly smiled inside when I recognized that people, especially some men, were intimidated by me. If I inspired fear, maybe they wouldn’t see how afraid I was. But it didn’t protect me. I kept getting hurt in the same way again and again.

I wasn’t happy. Anger was a mask I wore, but it wasn’t the real me. I wanted to feel real and let myself be the gentle, nurturing person I knew I really was.

To finally get rid of the anger that was pushing me, I had to take it out and deal with it. I had to face its source and look at all the pain associated with it.

I had to recognize that the true target of my anger was my parents, not me. By then, I realized I was just as angry with my mother for protecting my dad, maybe even more so.

Also by then, my parents escalated in their abusive treatment. I refused to continue the sick patterns and, after setting boundaries they refused to honor, I cut off all contact with them.

I had a new definition of forgiveness which didn’t include reconciliation, but in my heart, forgiveness represented a threat.

Someone suggested that I forgive my parents and I reacted as though that person was locking me in a cage with a hairy beast with long claws, razor teeth and yellow eyes.

In my mind, forgiveness would disarm me and leave me vulnerable to more abuse. I couldn’t be pressured into forgiveness or anything else related to a type of performance or measuring up.

My forgiveness facade was blown and I didn’t care. I had to continue to sort out my feelings instead of covering them up.

I continued to write and talk about my anger, fear and pain. One day, after months and months of processing, I woke up and actually wanted to forgive my mom and dad.

I was shocked. The day before, I hadn’t felt anywhere near being able to forgive. Suddenly, I was prepared to drop of the baggage of offense.  –Christina Enevoldsen, What About Forgiveness? 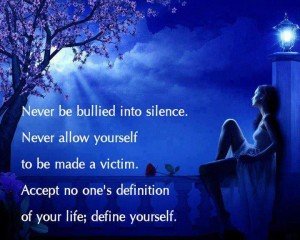 (I don’t know the origin of this picture, which is shared all over the Net.)