Mastodon CounterSocial So I Googled A Sociopath From My Past.... - Nyssa's Hobbit Hole
Skip to content

(By the way, I hear that my old friend Catherine is dealing with a “friend” living in her place and giving her much the same trouble my old “boarders” gave me.  Not moving out, complaining about everything, blaming you for everything, then getting all cutesy to manipulate you into letting them stay.  Dang, that sounds familiar.  Hubby, who just told me all about it, says people like this prey on people like Catherine and me, who are nice and sweet etc.  He was just telling me all about Catherine’s “boarder.”)

Now for the sociopath I googled.

I’ve mentioned this guy on my blog before.  Almost 20 years ago now (  wait–what?  ? )  , a guy came to my SCA shire (medieval re-enactment; a shire is a local group) and immediately began turning it upside-down.

First he made an entrance which I consider attention-seeking: He came to a Halloween event with a mask, so we’d wonder who he was.  Nobody else wore masks.  His girlfriend, one of our members, helped out by saying, “Who is it?”

Finally, after intriguing us all, making us wonder if he was some famous personage, he took off the mask–and was nobody anybody knew.  Shortly afterward, he began to insult the religious beliefs of my husband and me.

This became a pattern for him at subsequent SCA events, insulting Christians, getting up on his soapbox and railing against them.  I wanted to go to events to have fun, not to hear how my religion is evil and must be vanquished.  It was very stressful.

Then he took over the shire’s brand-new website and turned it into a platform promoting his own religious beliefs, leading to a link on his own site which said he was on a campaign to stamp out Christianity.  Now, religion in the context of medieval times would have been fine, but a shire website is not supposed to be about promoting anybody’s religion or giving instructions on how to astral-project.

Some people complained; my husband, the president of the group at the time, was the go-between and tried to resolve things peacefully.  He asked the guy to remove the stuff promoting religion without historical medieval context, and make some aesthetic changes because the site was a resource hog that took forever to load.  (Lots and lots of pictures, many animated, ON ONE PAGE, in the days of dial-up and HTML.)

This guy turned it into a huge conspiracy against him.  He made himself into a martyr, posted our e-mails online without proper context (such as phone calls which tried to resolve things peacefully), posted his e-mails as “proof” of what we allegedly “did” even though his e-mails twisted everything in their details, left out Hubby’s initial e-mail which was very diplomatic, brought in everybody he knew to support him, e-mailed other shires to badmouth us, tried to involve kingdom officials, and turned us into the Evil Oppressors of the Innocent Him.  And yes, he used everybody’s full, real names or SCA names.  Months later, one of our members got an e-mail from a stranger saying how horrible my husband and a few others were, because of what he read on the site, which was still up.

Finally he left the group.  We got a new webmaster, who made the site into a simple, informative website with meeting and event schedules, member bios, that sort of thing.  It also loaded a lot faster.

The kingdom–our local regional group–put out a webmaster’s guide which specifically prohibited every single thing this guy did.  It said the sites were not to be used to promote religions, not to be used as a soapbox, etc. etc.

But then we got mailbombed with about 100 e-mails labeled “karma.”  I strongly suspect this guy did it–especially since I later learned that he uses the term “karma” when punishing those he thinks have oppressed him.

He also came to a shire event brandishing a real sword, not fake ones like you’re supposed to have in the SCA, violating rules and creating a safety hazard.  Hubby felt he did this to goad Hubby into responding, because Hubby was sitting troll (ie, taking entrance fees and having people sign the customary waivers).

“Jenny’s Story” in my collection The Lighthouse was partially inspired by this whole thing.  I put this guy’s words into the mouth of Scott, the accuser of Jenny.  It was my way to deal with the anger over what he did to my husband and others in the shire.

I don’t want to make this a big, long post, but there’s much to sum up.  Over the years, every now and then–like maybe every five years or so–I wonder what the dude’s been up to, and start googling.  I keep coming up with some freaky stuff, like:

He claims to be the creator of several Atari games, which he claims intellectual rights to, and that Atari screwed him.

He likes to create computer viruses/trojans to avenge various perceived wrongs done against him or others.  He created one such trojan to punish Charter, the cable company.  Another was used against a bank.

He was busted for shooting naughty pictures of a 15-year-old, and now has to register as a sex offender.

He moved around a bit after leaving our shire, but eventually settled in a city in the next county where the shire is based.  (No, it’s not Fond du Lac or this county, thank goodness!)  I found an entire web forum in that city devoted to hating on him back around 2009.  I found all sorts of threads about his criminal history and complaining about him.

Over the years, I have gotten a strong picture of a guy who is severely mentally disturbed, probably a narcissistic sociopath.  Someone who must have attention, martyr complex, paranoia, that sort of thing.  Must be grandiose, must be the subject of some conspiracy, must avenge all wrongs like he’s Don Quixote.  Even the name he chose for the SCA was Lightbringer, like he’s a Messiah.

You can find this type in the writings of Sam Vaknin.

Well, tonight I went looking again, to see if yet another criminal case has been taken out against him.  Every once in a while, state court records show that he’s been arrested for something again, usually for violating the requirements of the sex registry.  And he always complains about being treated unfairly in one way or another.

Sure enough, he’s currently in such a case, updated just a few days ago.  A little googling revealed that he has turned this court case into part of a grand conspiracy against him, involving an allegedly corrupt local police force and even our state governor Scott Walker.  There are videos about this on Youtube.  It’s a featured case on a website called Leagle.

I even found his petition for writ of habeas corpus demanding a “federal criminal grand jury investigation.”  It has some weird garbledygook about not being a citizen of the US (Inc) but of the US, therefore not subject to the US (Inc).

He calls himself a Reverend now.  He’s talking about murder threats, false imprisonment, that the local police are out to get him and he didn’t really commit a crime with the 15-year-old, government conspiracy…. 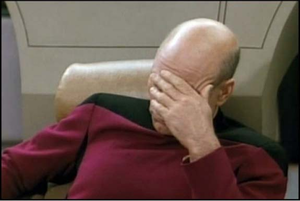 Oh yeah, and the court records for the current case reveal the state questioned his competence to stand trial.

So, a guy with a history of grandiosity, a martyr complex and sociopathy is claiming that he’s the target of a vast conspiracy and didn’t REALLY take naughty pictures of a 15-year-old.  (I’ve seen the website he ran around the time he was arrested for that charge, and its pictures of teenage girls, so I can believe he really did take naughty pics.)

And I recall how he turned my husband and several shire members into a kind of Evil Coalition against him, when they just wanted him to make the website into a simple, informative site which loads in less than 10 minutes and doesn’t hide page links.  (Seriously, the page links were invisible unless you knew to look for them.  This was 1999, when most people didn’t yet know a picture could also be a link.)

Yeah, I’m having a REALLY hard time believing that anything he says is for reals.  I think he wants his life to be a Hollywood movie.

No, I won’t name the guy on my website.  But I thought it was an amusing example of the kind of sociopathy you may come across.  And an example of why we should be careful not to believe just anything we read on the Net.

[Update 6-29-18: He STILL has not gone to trial, having changed his attorney several times.  See here.]