She looks so much happier now: 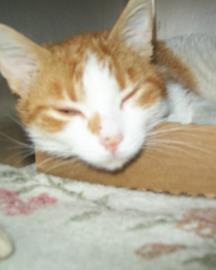 From her details page [used to be on the Humane Society website, but is now gone because she has been adopted]:

“Poor Amber came in as a stray, her collar at some point must have gotten tangled around her front leg and started to embed itself.  She is almost healed from her wounds and is such a sweet sweet girl.”

Not a kitten after all, but 5 years old.

We went to visit her today at the Humane Society.  She looks MUCH better. When we found her, she was skin and bones and freezing.  Now she’s healthy, looks a lot bigger, and is healing up from her sores.  (Her collar was caught around her front leg and digging into her skin.)

She’s no longer scared, but content and ready to nuzzle our hands.  I think she remembered us.  🙂

The poor thing could have starved or frozen to death, so it’s good to see her like this.

She has a microchip, so the Humane Society discovered who the owner is–and that she was a shelter cat before.  They were distressed to find that they adopted her out to somebody who would do this.

They didn’t want to give her back, of course.  This cat had been out for *at least* two weeks when we caught her, because we’d seen her around for that long.

See Our rescue kitty has been adopted.