Several months ago, after months of saving up (to prove he truly wanted them and it was not a passing fancy), my son got a pair of spice finches: 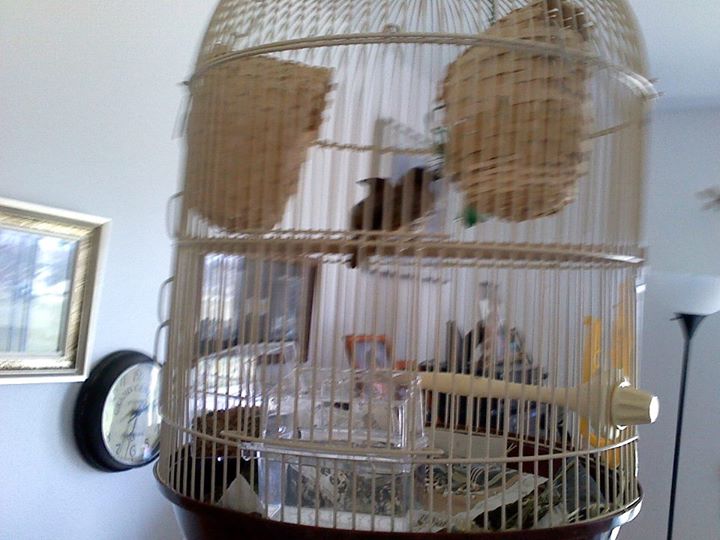 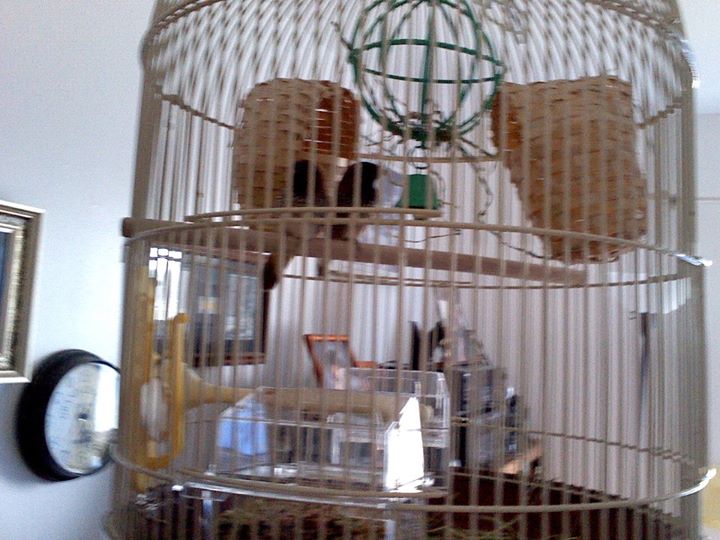 The cats watching closely as we adjusted the height of the cage until they could no longer reach it: 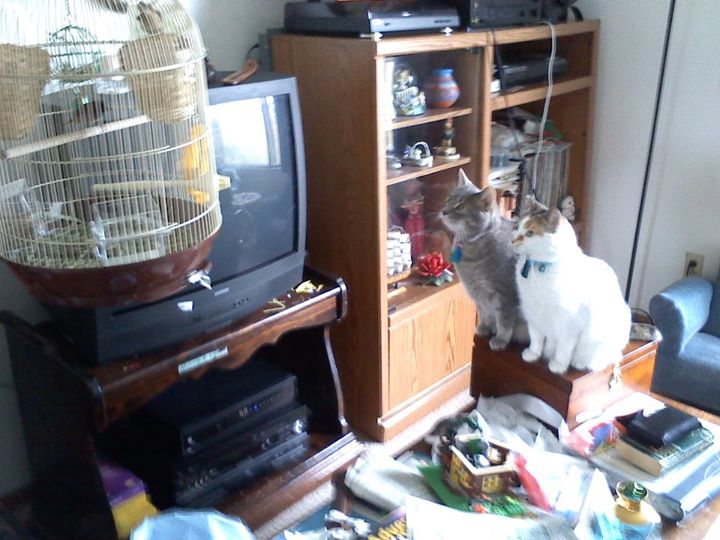 (They now have a bigger cage.  I’d like to get some close-ups, except that my stupid non-smartphone (an AT&T Z431 Gophone with smartphone-like features, but limited application) has stopped uploading pictures to Facebook for some unknown reason, and we don’t know where our camera has gotten to.)

When I first saw these two in the pet store, they were sitting on a perch, cuddled together.  We’re not sure if they’re mates, or two girls, or two boys.  But they do love each other and needed to be kept together–and, well, finches need to be in pairs, anyway, so they don’t waste away from loneliness.

Aside from the occasional argument over cleaning the cage today or tomorrow, my son has been pretty good about taking care of them.  It also helps that every day I write his chores down on a slate (old-fashioned slate with slate pencil, as used in Laura Ingalls Wilder’s time), and include bird chores.

Hubby doesn’t quite “get” wanting birds as pets.  But I do, because I had a canary as a child.

I don’t remember whose idea it was, just that one day my aunt took me to an Amish farm in Michigan, where we got the canary.  She said they were called “bad Amish,” because they had a truck parked out front.

But I saw the inside of the farmhouse: Except for no TV, radio or electricity, it looked like any other house.  The living room had a bunch of board games.  I forget if there was a phone or not.

(30 years does that to a memory.  It’s a shame I had to suspend writing about my childhood–an undertaking just like my college memoirs–when I got so morning sick I couldn’t even stand the smell of the computer.  Then I had a baby, and writing my memoirs got pushed aside….)

Anyway, I named the bird “Ralph-Elvis.”  The “Elvis” was for my mom, an Elvis fan.  The “Ralph” was for the main character on Greatest American Hero, an 80s show about an unlikely superhero, which I loved.  It also spawned a great theme song and #1 radio hit (the link also has scenes from the show).

And now, these two spice finches–named Sugar and Spice–bring their chatters, warbles and songs into our daily life.  Finches don’t sing like other birds: It’s more of a chattering, buzzing and squeaking.  But it is pretty just the same:

Song of the spice finch (Sugar and Spice love videos like this):